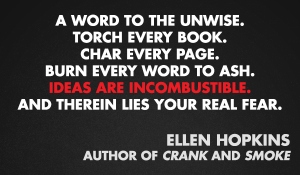 To you zealots and bigots and false
patriots who live in fear of discourse.
You screamers and banners and burners
who would force books
off shelves in your brand name
of greater good.

You say you’re afraid for children,
innocents ripe for corruption
by perversion or sorcery on the page.
But sticks and stones do break
bones, and ignorance is no armor.
You do not speak for me,
and will not deny my kids magic
in favor of miracles.

You say you’re afraid for America,
the red, white and blue corroded
by terrorists, socialists, the sexually
confused. But we are a vast quilt
of patchwork cultures and multi-gendered
identities. You cannot speak for those
whose ancestors braved
different seas.

You say you’re afraid for God,
the living word eroded by Muhammed
and Darwin and Magdalene.
But the omnipotent sculptor of heaven
and earth designed intelligence.
Surely you dare not speak
for the father, who opens
his arms to all.

A word to the unwise.
Torch every book.
Char every page.
Burn every word to ash.
Ideas are incombustible.
And therein lies your real fear.

Welcome everyone to my blog! My name is Cate and I recently decided that, rather than keep my reviews of books I’ve read limited to one medium, I would create a blog for every book lover to access on the internet. Why? Well, because I love to read and also because I want to help out authors by giving their books a spotlight on my blog, and possibly help them reach a wider audience. So take a look around and enjoy yourself!